We have been tracking the progress and development of 4 cadets belonging to the Huntsville Police Department’s Academy Class. They graduated in the previous week and for the next 14 weeks, they will continue working with the training officer. 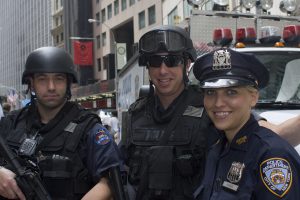 The name of the four graduates is John Smith ( 21), James Williams ( 22), Mary Jones ( 28 ) and Jennifer Johnson ( 26 ). All of them are from Torrington and they are willing to share their training experience with Kevin Joseph, Torringtons local writer.

Anyone who is aware of the training procedure will know that the training always ends with a twist at the end.

However, all of them were unaware of the date of the final physical training exam.

James Williams said, ” All of us thought that the final training was scheduled for another day. That is why we went outside to have lunch.

John and James went outside for a barbecue lunch. Mary headed to Burger King for a meal.

John said,” After some time, we got to know that the test was scheduled on that day only. We just had 2 hours to digest our lunch.

We somehow ended up digesting our lunch, James exclaimed. ” Even now, I am afraid of trying out barbecue after that experience.

James said, ” I feel like a totally different person. I was with my parents near Birmingham when I received the job offer. Moving here was a completely new experience for me. Except for my aunt, I knew no one else here”.

There is one interesting thing which is common between all the four of them. All of them were inspired by another police officer to join the force.

James also thanked his father saying that without his constant support, he wouldn’t have been able to make it so far.

John said, ” My father was a cop in Chicago and the impact that he made in the community really inspired me. Saying everyone greet him and thank him made me realize that being a police officer will help me make a difference in the society”.

Mary grew up in Mason Court and because of her feisty nature, she was advised to stay away from the police. Mary said” As I grew up, I was inspired to join the police by school resource officer, Jack Smith. He was my main inspiration as I grew up and I am very thankful to him”.

The story of Patricia is more interesting. Once she fell asleep while driving and her car was dangling over the water when a police officer rescued me. ” This incident really touched me and motivated me to join the police force”.